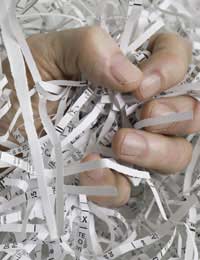 Young, old, rich or poor, identity fraud is a silent stalker when it comes to criminal activity. It will normally take somebody over 12 months to realise they have been the victim of identity fraud. If you have an inkling that your identity has been stolen it is better you act sooner rather than later.

“It was horrible finding out somebody else had stolen my identity, it felt like somebody had robbed me but there was nothing physically missing from my belongings,” says Clare a 27-year old from Bury who lives alone.

Clare had never been good at keeping track of her money and was not the type of person who used a shredder for her bills or bank statements. Alarm bells first started to ring when she got a phone call from a credit card company asking why she had not paid one of her bills.

“I remember getting a phone call from a credit card company and thinking nothing of it, I just thought they had the wrong person. I think they realised I didn’t know what they were talking about and suggested to me that I may be a victim of identity fraud,” explains Clare.

Clare’s first step was to inform the police; she insisted that they provide her with a crime reference number so there was a record of her call.

Her next step was to get a personal credit rating, she wanted the report so she could see what accounts and cards had been opened in her name over the past months.

“I found out two credit cards had been opened in my name, both had a couple of thousand pounds on them. The police suggested that the thieves may have been able to intercept my post so I never knew what was happening,” says Clare.

Clare shared her mailbox with others in the same apartment block, so it was quite possible that somebody could have intercepted her post.

Once Clare had found out which accounts had been opened in her name she contacted the lenders and told them her situation. They contacted the police to verify what she was saying and then sent her some forms to fill in. She waited a few weeks but the lenders agreed they would not pursue her for the money.

“I also notified the post office and enquired about whether anyone had redirected any of my mail and if so to which address,” says Clare.

“The person who had stolen my identity had built up hefty bills on my credit cards, which has put a dent on my personal credit rating,” says Clare.

It will take time for Clare’s credit rating to get back to what it used to be because some of the fraudulent activity will have left permanent record on her credit rating.

Clare made sure in future that she regularly kept a check on her finances, used a shredder for all of her personal documents and checked her personal credit rating regularly to make sure that everything was as it should be.

Having your identity stolen can be a traumatic experience and those that have gone through it are usually extra cautious in future. Looking after things such as your passport, old cheque books and any dormant accounts to make sure nobody else is taking advantage of them.